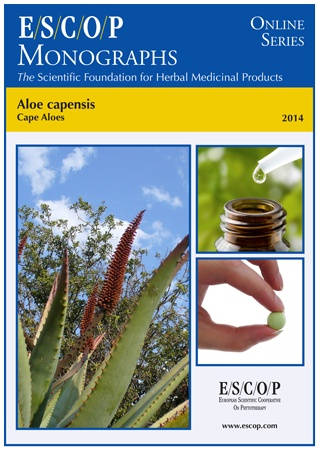 SUMMARY:
The herbal monograph selects and summarises scientific studies and textbooks regarding efficacy, dosage and safety to support the therapeutic uses of cape aloes.
This herbal drug by definition consists of the concentrated and dried juice of the leaves of various species of aloe, mainly Aloe ferox Miller and its hybrids.  Characteristic constituents of cape aloe are aloe-emodin and anthrone-C-glycoside 5-hydroxyaloin A.
Studies with its main active constituents barbaloin, which is a mixture of various aloins, are included.
The therapeutic indication is short term use of occasional constipation.
Administration of cape aloes addresses: dosage; its duration of use; contra-indications; special warnings; special precautions for use; interactions with other medicinal products; other forms of interaction; in pregnancy and lactation; its effects on ability to drive;  undesirable effects; especially regarding overdose.
Pharmacological studies concern pharmacokinetics of in vitro and in vivo experiments regarding the mechanism of action of cape aloes, they also show antiproliferative effects in cancer cell lines and assess absorption and secretion of cape aloes and of islolated barbaloin in animals and humans.
Preclinical safety data for cape aloes were assessed in toxicity studies.
Safety data were assessed in human studies and suggest that this laxative should not be used for periods of more than 2 weeks, without medical advice.
The selection of literature cited in the monograph is aimed at bringing together relevant examples of the possible physiological roles of cape aloes and its major constituents.