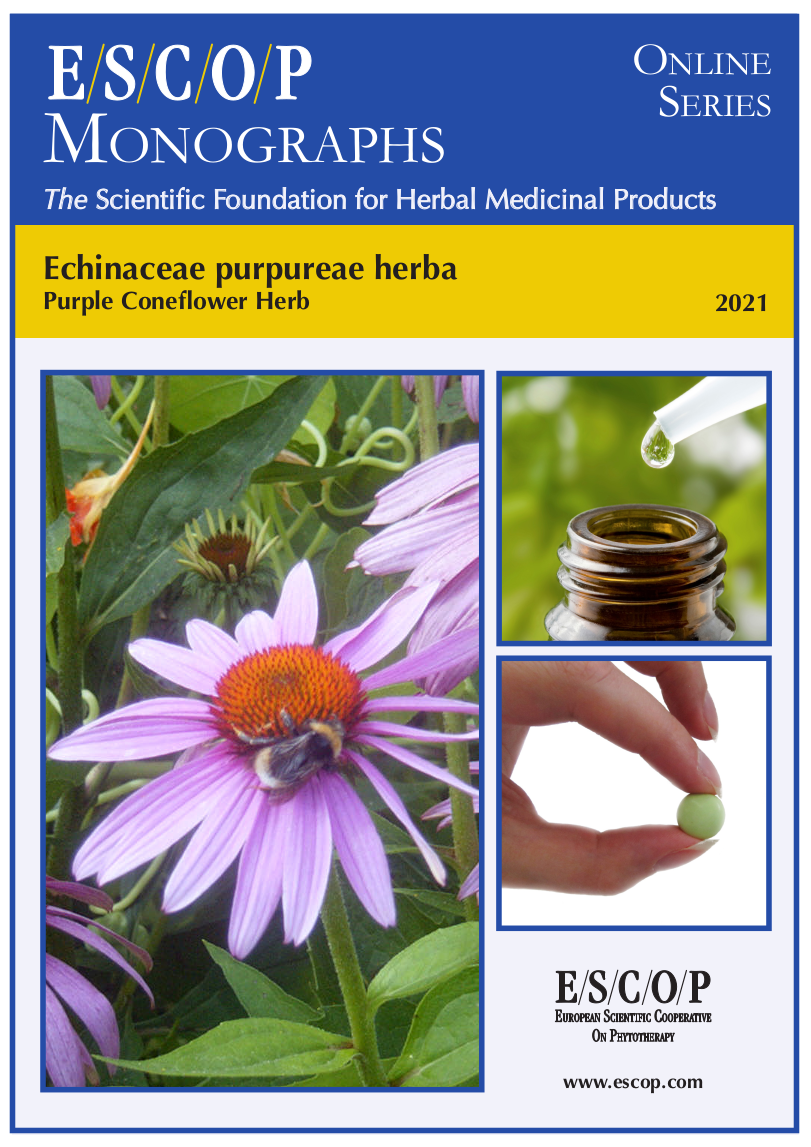 SUMMARY
The herbal monograph selects and summarizes scientific studies and textbooks regarding efficacy, dosage, and safety to support the therapeutic uses of purple coneflower herb. This herbal drug by definition, consists of the flowering aerial parts of Echinacea purpurea (L.) Moench.

The therapeutic indications are recurrent infections of the upper respiratory tract (common colds) and of the urogenital tract.

Administration of purple coneflower herb addresses posology; its duration of use; contra-indications; special warnings; special precautions for use; interactions with other medicinal products; other forms of interaction; in pregnancy and lactation; its effects on the ability to drive; undesirable effects; overdose.

In vitro experiments with purple coneflower herb demonstrated its effects on immune functions, on cytotoxicity, as an antiviral, on wound healing and on hyaluronidase-inhibiting activity. In vivo experiments with purple coneflower herb, its pressed juice, extracts, or isolated alkylamides, demonstrated an increase of splenocyte proliferation and splenic natural killer (NK) cell activity; stimulation of T lymphocytes, stimulation of carbon clearance, enhancement of the immune response, an increase in monocytes and lymphocytes, reduction of radiation-induced leukopenia, prevented radiation-induced impairment of immunity, activated macrophages to stimulate IFN-γ production, enhanced antibody production in response to vaccination and an increased phagocytic index, as well as TNF-𝛼 and NO release in LPS-stimulated alveolar macrophages.

Pharmacological studies with healthy volunteers found that in a randomized, double-blind study of male athletes, enhanced exercise induced decreases in soluble interleukin receptor (sIL-R) and also enhanced exercise induced increases in urinary interleukin-6 and serum cortisol activities. A second pharmacological randomized, double-blind study evaluated the ability of pressed juice to prevent infections with Rhinovirus type 39. Although the rate of infection was not decreased, the purple coneflower herb recipients had fewer colds, compared to those in the placebo recipients.

Pharmacokinetics of orally administered isobutylamides were assessed in rats and resulted in rapid absorption and distribution into the liver and brain tissues.

Safety data were assessed in human studies. Several meta-analyses on clinical use and safety generally concluded that the use of Echinacea was safe, notwithstanding that several adverse reactions have been reported.

The selection of literature cited in the monograph is aimed at bringing together relevant information about the possible physiological roles of purple coneflower herb and its major constituents.