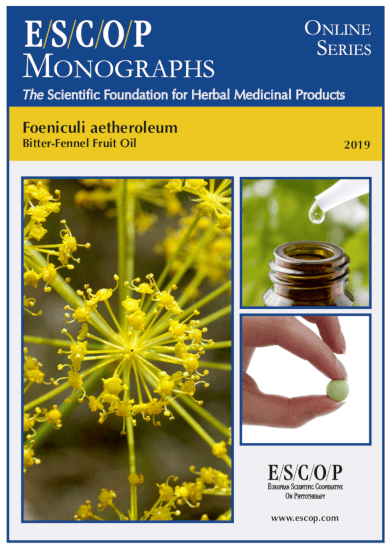 The herbal monograph selects and summarises scientific studies and textbooks regarding efficacy, dosage and safety to support the therapeutic uses of bitter-fennel fruit oil.
This herbal drug by definition consists of the volatile oil obtained by steam distillation from the ripe fruits of Foeniculum vulgare Miller, ssp. vulgare, var. vulgare.
Studies with its main characteristic constituents anethole and fenchone are included.
The therapeutic indications are dyspeptic complaints such as mild spasmodic gastro-intestinal ailments, bloating and flatulence and catarrh in the upper respiratory tract.
Administration of bitter-fennel fruit oil addresses posology; its duration of use; contra-indications; special warnings; special precautions for use; interactions with other medicinal products; other forms of interaction; in pregnancy and lactation; its effects on ability to drive; undesirable effects; overdose.
In vitro experiments with the oil demonstrated antimicrobial, antioxidant, anticoagulant and spasmolytic effects. Anethole showed local anaesthetic, tumour-inhibiting and cytotoxic effects.
In vivo experiments with bitter-fennel fruit oil or its extracts and the main constituents anethole and fenchone demonstrated secretolytic, expectorant, oestrogenic, antitumour, anti-genotoxic, enzyme-modulating, analgesic, anti-thrombotic, anti-hepatotoxic and osteoporosis-prophylactic properties.
Controlled clinical studies with the oil were used in children with colic and in patients with dysmenorrhea.
Preclinical safety data were assessed in toxicity studies. The oil may have abortifacient effects and toxic effects on foetal cells. There was no evidence of teratogenicity. Safety data were assessed in a human study with children. No side effects were reported.
The selection of literature cited in the monograph is aimed at bringing together relevant information about the possible physiological roles of bitter-fennel fruit oil and its major constituents.