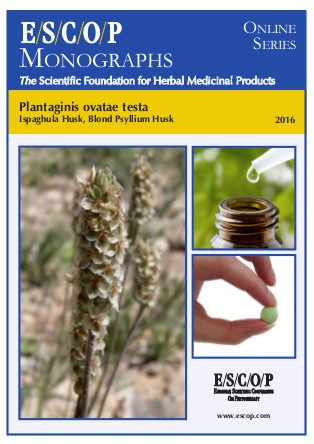 SUMMARY:
The herbal monograph selects and summarises scientific studies and textbooks regarding efficacy, dosage and safety to support the therapeutic uses of ispaghula husk.
This herbal drug by definition consists of the episperm and collapsed adjacent layers removed from the seeds of Plantago ovata Forssk.
Studies with its main characteristic constituents mucilage polysaccharides and fibres are included.
The therapeutic indications are treatment of occasional constipation; conditions in which easy defaecation with soft stools is desirable, e.g. in cases of anal fissures or haemorrhoids, after rectal or anal surgery, and during pregnancy; conditions which need an increased daily intake of fibre, e.g. irritable bowel syndrome; and adjuvant symptomatic therapy in cases of diarrhoea from various causes and as an adjunct to a low fat diet in the treatment of mild to moderate hypercholesterolaemia.
Administration of ispaghula husk addresses posology; its duration of use; contra-indications; special warnings; special precautions for use; interactions with other medicinal products; other forms of interaction; in pregnancy and lactation; its effects on ability to drive; undesirable effects; overdose.
In vivo experiments with ispaghula husk demonstrate reduction of experimentally-induced hyperlipidaemia and atherosclerosis in animals.
Pharmacological studies in humans concern laxative activities and increase of faecal fat excretion. More than 20 controlled clinical studies with constipated human patients demonstrated its use as laxative and as cholesterol-lowering agent in patients with mild to moderate hypercholesterolaemia.
Pharmacokinetics of orally administered ispaghula husk demonstrated that the vegetable fibre is not absorbed in the intestinal tract.
Clinical safety data were collected for long-term administration in a study in humans.
The selection of literature cited in the monograph is aimed at bringing together relevant information about the possible physiological roles of ispaghula husk and its major constituents.