You are here: Home / News / Silibinin is able to reduce brain metastases from lung cancer resistant to chemotherapy and radiation therapy 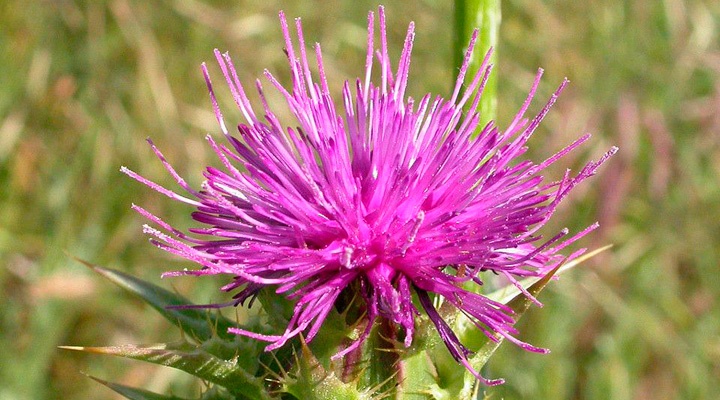 According to a study carried out at the Institut Català de Oncologia (ICO) in Girona, published in Oncotarget (1), silibinin, a natural substance present in the fruit Silybum marianum, has been shown to be able to reduce brain metastases from lung cancer resistant to chemotherapy and radiation therapy. The antitumor role of silibinin had been seen in cell models and mice, but it is the first report of its efficacy in humans with cancer.

The fruit of the milk thistle (Silybum marianum (L.) Gaertn, from the Asteraceae family) contains complex flavonolignans with clinically demonstrated hepatoprotective and antioxidant activities. Silymarin is considered the main active ingredient of the plant and consists of a mixture of at least seven flavonolignans and one flavonoid. The most abundant and active constituents in silymarin are two diastereoisomeric compounds (silybin A and silyibin B) known as silybin or silibinin, which is represents 50-70% of silymarin. Several clinical studies have shown that silymarin is effective in treating various liver diseases, including hepatitis, cirrhosis, fatty liver infiltration (fatty liver due to alcoholic and non-alcoholic causes) and inflammation of the bile ducts. The antioxidant properties of silymarin greatly increase liver resistance to toxic effects. (2, 3)

Reduction of brain metastases
In a recent study led by Joaquim Bosch, it was shown that an oral supplementation with 420-1050 mg/day of Legasil TM (60% of silibinin isoforms) has reduced the brain metastases of two patients with advanced lung cancer between 70 and 85%. Patients had previously received chemotherapy and radiation therapy, but did not experience improvement. This is the first reported effectiveness of this product in humans with cancer.
This finding opens up new treatment options for this type of patients, but could also be applied in brain metastases of other cancers (breast or melanoma, for example) and in primary brain tumors such as glioblastoma multiforme. One of the limitations of the study is that silibinin has only shown activity against brain metastases, not lesions in the rest of the body. Researchers at ICO Girona are working to understand how silibinin works against brain metastases and to explore new formulations or combinations with other drugs that make it effective in other parts of the body as well.